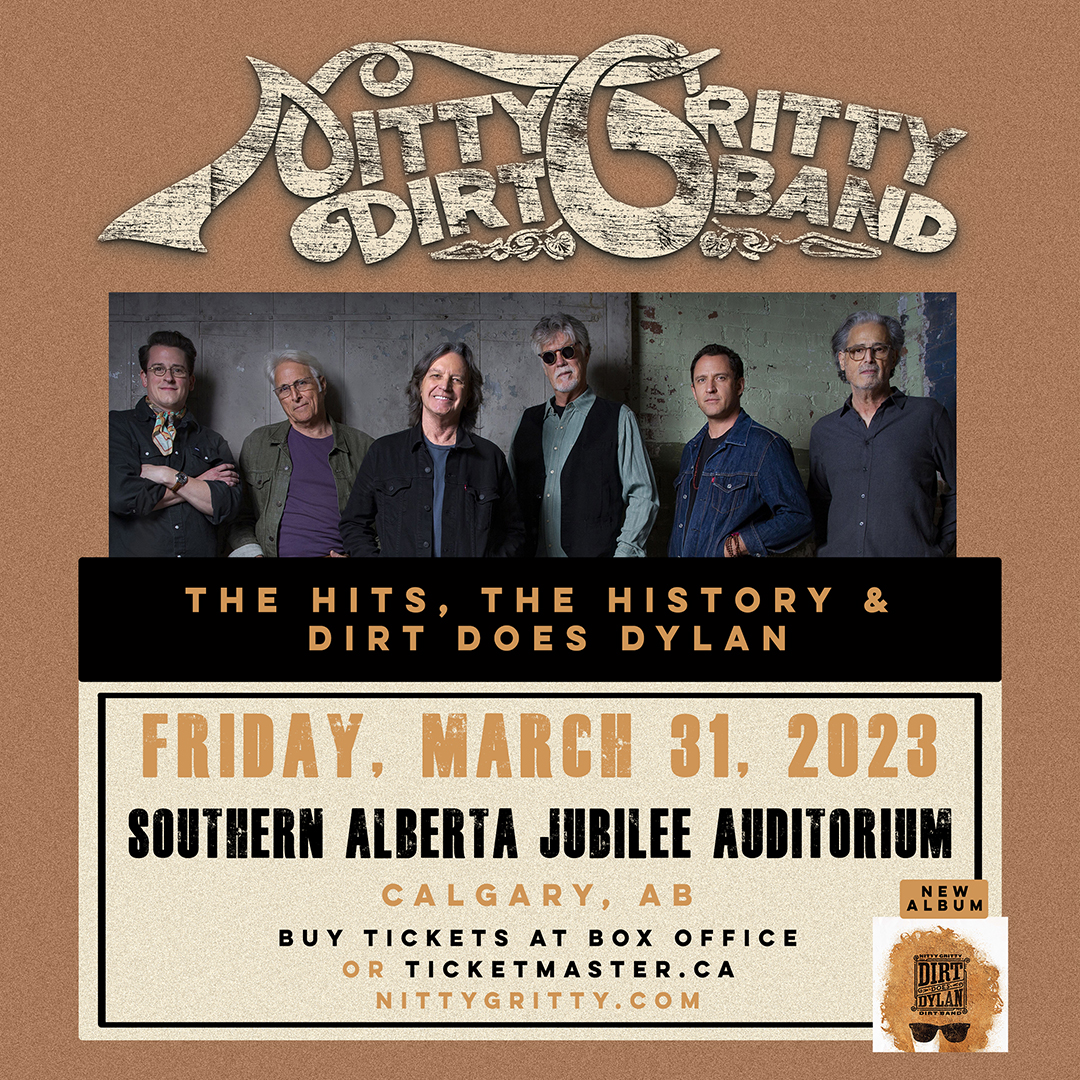 A mix of reimagined classics and compelling newer works.

For more information about current requirements, click the COVID-19 Update tab, at the top of this page.

PLEASE NOTE: Promoters may require additional measures above the public health orders. Check the specific event listing on the promoter’s website or with your point of sale for further details.

Get Tickets »
This event is also showing at the Northern Alberta Jubilee Auditorium in Edmonton.

More about this event

Many veteran bands trade on nostalgia, on replication of past glories, and on recycled emotions
from younger, more carefree days.

The Nitty Gritty Dirt Band trades on a mix of reimagined classics and compelling newer works.
The group formed in 1966 as a Long Beach, California jug band, scored its first charting single
in 1967, and embarked on a self-propelled ride through folk, country, rock ‘n’ roll, pop, bluegrass,
and the amalgam now known as “Americana.” The first major hit came in 1971 with the
epic “Mr. Bojangles,” which, along with insistent support from banjo master Earl Scruggs,
opened doors in Nashville. Behind those doors were Earl Scruggs, Roy Acuff, Doc Watson,
Mother Maybelle Carter, Jimmy Martin, and others who would collaborate on a multi-artist,
multi-generational, three-disc 1972 masterpiece: Will the Circle Be Unbroken went triple Platinum,
spawned two later volumes, and wound up in the Grammy Hall of Fame.

Was this a cutting-edge combo or a group of revivalists? Was the goal rebellion or musical
piety? Yes, to all these things. In the 1980s, the Dirt Band reeled off 15 straight Top 10 country
hits, including chart-toppers “Long Hard Road (The Sharecropper’s Dream),” “Modern Day
Romance,” and “Fishin’ in the Dark (co-written by Jim Photoglo, who would join the band in
the second decade of the new century). 1989 brought a second Circle album, this one featuring
singer-songwriter talents including John Prine, Rosanne Cash, and John Hiatt and garnering
two Grammy awards for the band (it later won another, for a collaboration with Earl Scruggs
and other fine folks). Circle II also won the Country Music Association’s Album of the Year
prize. Circle III was released in 2003, featuring collaborations with Johnny Cash, Dwight
Yoakam, Emmylou Harris, Taj Mahal, and more.

Throughout the group’s lifetime, personnel has changed, with each change resulting in positive
steps forward, new ways of playing the old songs, and renewed enthusiasm for writing and
recording fresh material. The latest Dirt Band lineup is expanded to six members for the first
time since 1968. Today’s group consists of founding member Jeff Hanna, harp master Jimmie
Fadden (who joined in 1966), and soulful-voiced Bob Carpenter, who has more than 40 years of
service in the ensemble. Those veterans are now joined by singer-songwriter-bass man Jim
Photoglo, fiddle and mandolin wizard Ross Holmes, and Hanna’s son, the preternaturally talented
singer and guitarist Jaime Hanna.

Blood harmony, thrilling instrumental flights, undeniable stage chemistry … these things are
part of each Dirt Band show, just as they are part of Dirt Does Dylan, the first recording from
the reconfigured, six-strong group. Produced by Ray Kennedy and Jeff Hanna, it’s a remarkable
ride through some of the most impactful songs of the past century, penned by Bob Dylan
and taken for a blue highway spin by a great American band, with help from genius-level contemporary
artists like Jason Isbell and The War and Treaty.

A Dirt Band show is unlike any other. For legions of fans, it’s less about the memories than the
moment, crisp as an Autumn apple and rich as a royal flush.
Share this event

The Jubilee Auditorium is accessible for patrons. Click here for seating and parking options.